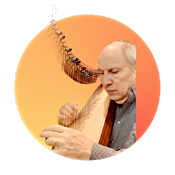 I love Celtic harp.  I combine a Celtic and Medieval repertoire with original and other fun songs.  I perform live, on recordings, and lately I have been making harp videos, some from my serious repertoire, and many funny ones.  Some of the video songs are on my newest albums .

Oh! That Gorgonzola Cheese is on my album, “The Fun Stuff" 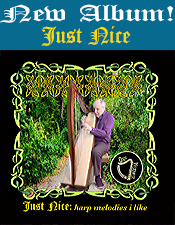 On learning the harp: "Sylvia Woods wrote a great book called ‘Teach Yourself To Play the Folk Harp.”  So I did."

On How I Play: I am sometimes asked for arrangements, but, sadly, I don't have any because I play by ear.  That's why I have callouses on my lobes...

On Performing: "Some musicians simply perform the music.  Some make the music a performance.  A performance is always more fun."

On Celtic harp technique: "While performing in the band Lughnasa we sometimes played in pubs.  It became necessary to perfect a harp technique that involved deflecting flying bar stools while not missing a beat on the harp.  It was a bit like flipping sharping levers in the middle of a tune, but bigger.  And less predictable!"